Martin and Brown: Cases Highlighting Vastly Different Perceptions and an Effort to Understand Them

One only needs to scroll through social media feeds, watch clips from various talking heads on cable news networks, or tune into radio news talk shows to see that there is a striking difference between most white perceptions of the Brown incident and most black perceptions of the incident.  The problem is that the perceptions on both sides neglect fundamental facts and concerns.  Rather, both sides take an "all or nothing" approach, jumping into their usual defensive postures.   Either the comment is made with the implication that Brown was not doing anything wrong and that the officer is a murderer who should have been immediately arrested; or the comment implies that racism and discrimination do not exist, and that to say so is simply "race baiting". The "race baiting" charge is then followed by a comment that is racist itself and proves the underlying biases of the comment maker.

Those in support of Michael Brown equate his circumstance with that of Trayvon Martin's, intentionally or not portrays Brown as a law-abiding and non threatening teenager.  Those against the Ferguson protests also equate Brown with Martin, but with the implication that both were criminal.  Both narratives exist despite the fact that Brown had just assaulted a convenience store owner, feeling empowered even without a gun; and, despite the fact that Martin had done nothing criminal to warrant the following and harassment by George Zimmerman, who is now assumed by some as a member of law enforcement.  In one narrative they are both innocent victims and in the other equally incorrect narrative they are both criminals.  There are fundamentally different facts between these two cases that a frighteningly large percentage of Americans seem to overlook or be unaware of.   I want to simultaneously cry in sadness and pull my hair out in madness. 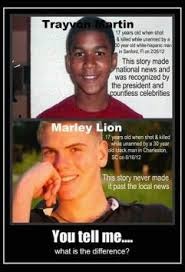 My favorite, and I say this sarcastically, are the comments of those that claim to not understand why Trayvon Martin's shooting received so much media attention, while a random white guy or white girl's murder by a black man did not warrant the same attention.  Often times, I find the poster to the right is shared to prove this claim that there is a possible reverse racism or effort to "race bait".  The question in the poster: "What is the difference"?  The maker of the poster and those that share the poster fail to recognize the difference.  The difference is that in once case there was no question as to whether or not the shooter should be captured, put on trial and punished. In Martin's shooting, it appears to have taken public pressure by the black community to arrest and put on trial the shooter of Trayvon Martin.  Whether you believe the narrative or not, this is why the black community and others were outraged.  To water down the these cases to a similarity of death v. death at the hands of someone of the opposite race missed the point. This oversimplification seems to occur within both perceptions. 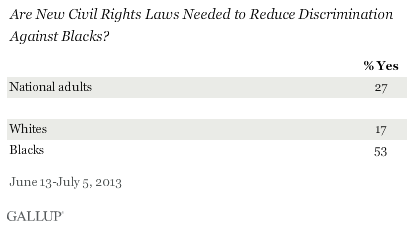 The differing perceptions of whites and blacks regarding race, discrimination, and treatment in the criminal justice system have been present before these two incidents.   Survey after survey supports what I anecdotally witness on the internet and television, and even among my students.  The Pew Research Center survey (right) and the first two Gallup surveys (below) illustrate that whites are more likely than blacks to believe that racial equality has been achieved and that claims of racism or bias are usually exaggerated or unjustified.  The Gallup survey results below dig into differing perceptions among blacks and whites regarding police. 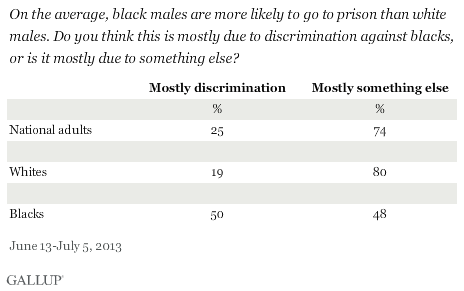 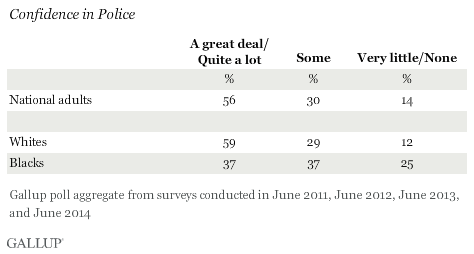 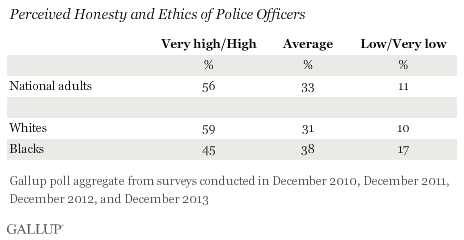 Contemplating the Origin of These Perceptions

Seeing this, it isn't hard to believe why the black community is skeptical about the account of the shooting given by Officer Wilson and the Ferguson police department.  If you look at the treatment historically of unarmed, innocent and peaceful black citizens, especially leading up to and during the civil rights movement, the distrust of law enforcement is even more understandable.  This is a history that includes the use of dogs and painful fire hoses on peaceful protesters, racial profiling in car stops, and the coordination of top law enforcement officials with lynch mobs and the KKK.  However, perceptions of whites may often neglect experiences of whites in the same way that perceptions of whites by blacks may be neglecting the experiences of blacks.

The high rates of crime in minority communities, the fact that blacks make up a disproportionate share of those in prison, and the frequent coverage of the media of crimes committed by black suspects fuel white fear and intimidation.  Whether the coverage is objective and proportionate or not is a separate matter.  The point is the views of some whites should not be lost on those that claim whites hate blacks for simply being black, claiming a racism that continues from decades of unequal treatment.  Does pure racism motivate the opinions of some?  Most likely, but this should not be the characterization of the whole group, in this case a characterization of all whites.  At the same time, it should not be assumed that all blacks hate whites as a result of historical treatment of blacks by whites.  However, the feelings of whites should not be lost on whites that claim there is no assumption made by them of wrong-doing by blacks, but then point to the high crime rate among blacks as support for the feeling they just denied as impacting their views.  While we attempt to explain our own biases, we should also confront those biases and recognize when they may be leading to an unfair and somewhat false perception of a situation, person, or group.


As a society, we cannot run from these perceptions, and we cannot deny they differ nor deny that the differing perceptions may be justified. As individuals we do ourselves an injustice, myself included, if we consistently take on a defensive and antagonistic stance.  Since we are all guilty of this, the solution is easier stated than done.  However it is not impossible for a society to confront its demons and have uncomfortable conversations.  All types of biases exist that inform our perceptions, whether they are racially motivated biases or motivated by someone's economic condition, beliefs, or weight.  We cannot deny our own biases but then argue for the bias of another.  What must equally be avoided is the act of dismissing racial biases because they are uncomfortable to talk about with a willingness to discuss less controversial biases.  Thankfully, we have seen confronting uncomfortable histories and biases successfully done in other countries without an unraveling of social order.  Both perceptions exist for a reason.  These are perceptions that have been fueled partly by reality and partly by biases that have been passed down from one generation to the next.

In a coming article I will explore in greater detail the problems with these perceptions and make specific suggestions regarding the Ferguson, Missouri protest.