Currently candidate Ben Carson is leading the polls in Iowa among Republicans, with Trump following behind.  Does this mean Ben Carson may win the Iowa Republican Caucus?  Perhaps.  Does this mean Carson will win the Republican nomination for president?  Hold on there.  Republican voters in Iowa do not seem to be in line with the rest of the country's Republicans when it comes to picking the presidential candidate for their party.  In fact, if you leave out Republican incumbent re-election bids in which the incumbent was unopposed in the nomination process, Iowa's track record leaves much to be desired.

So should the public put much weight in polls coming out of Iowa before the actual caucus or even in the actual Iowa caucus results in January?  Probably not.  New Hampshire primary results may be a better predictor of the next Republican presidential nominee to run in the general election for President.  In the presidential elections since 1976 in which the incumbent president was not a Republican seeking re-election, Iowa Republican caucus voters only correctly chose the eventual Republican nominee for 3 out of 7 elections, or less than half.  In the past two elections they were wrong both times.  In 2008, Iowa Republicans chose Mike Huckabee and in 2012 they chose Rick Santorum; neither of which won the national party's nomination for failure to win enough republican primaries and caucuses in other states, and thus enough delegates at the party convention.  John McCain and Mitt Romney, the eventual nominees in 2008 and 2012 respectively, both won the Republican primary in New Hampshire the years they ran.  In addition to the predicting errors of 2008 and 2012, Iowa Republicans incorrectly chose George H. Bush over Ronald Reagan in 1980, and then Bob Dole over George H. Bush in 1988.  The Republican party in Iowa did not use the county caucus style election to choose the nominee of the party before 1976.    In comparison, New Hampshire voters selected the eventual nominee 5 out of those same 7 elections, and correctly did so in the last two presidential elections, unlike Iowans.
Iowan Republicans, at least those that voted in the last two presidential election, seem to prefer the candidate that is less mainstream, perhaps further to the right ideologically, and less palatable to Republicans as a whole across the country.  Carson, Huckabee, and Santorum fit this mold. 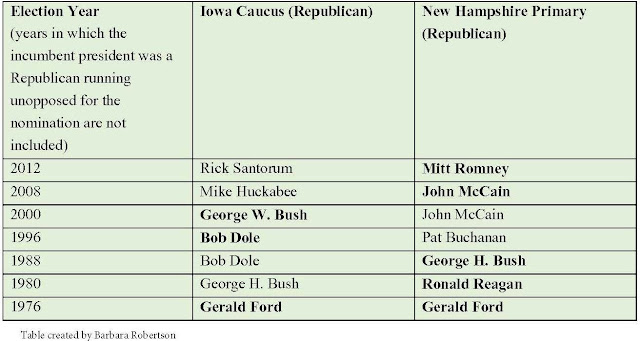 Why does this matter?
Iowa and New Hampshire are known as "first in the nation" in terms of the party contests for the Presidential nomination.  Iowa traditionally has held the first caucus, while New Hampshire has traditionally held the first primary.  Primaries and caucuses are both used to choose nominees of the parties for a general election.  The difference between a caucus and a primary is in the format of these elections.  Since these states are first in the nation, they give the rest of America a good opportunity to see how candidates actually fare in a competition, or an actual election.  An early win for a candidate, for example in Iowa or New Hampshire, gives the candidate a boost, or greater momentum.  This means an increase in media exposure, messaging, and campaign funds.  Winners of the Republican elections in Iowa and New Hampshire both receive the boost, but it seems as though the winners in New Hampshire, at least in recent presidential elections, are more likely to be able to carry those wins further into additional states, or at least more states than the winners in Iowa are able to.  This is likely due to the ideological placement of candidates prefered by New Hampshire voters compared to those preferred by Iowa Republicans.


If you like this blog, this or any other article, please don't hesitate to subscribe with your email to receive notices of future articles and to share it with others via email, Facebook or other social media outlets!

Posted by Unknown No comments: